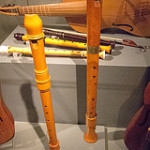 The recorder is the perfect instrument to introduce to students in 3rd or 4th grade. They are lightweight, simple to learn and fun to play. …..and teacher friendly ~ you can take off the mouth piece if a student insists on blowing inappropriately while allowing them to still practice their fingerings!! I have always enjoyed teaching it and am excited about having my students try out the new Aulos recorders in the fall. In researching this versatile instrument, I came across some facts that I thought might be helpful when introducing it to your students this year!