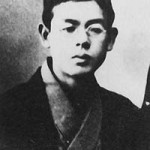 If you research Japanese composer Rentaro Taki, you would find very little. Yet this man’s folk song “Kojo no Tsuki” is so popular in Japanese culture that is was recorded by both Thelonius Monk and The Scorpions. All I was able to find on this young composer was in Wikipedia which is not necessarily the most reliable source.

It is understandable that there is little information available given that he died at such a young age, but I found the lack of information to be very peculiar.

When I looked at old music books I studied in college, I realized that all were based on Western music. Most of the music textbooks we use for teaching are focused on Western Music. We study Bach and Beethoven, sonata form and counterpoint, etc… We touch upon music of different genres and cultures, but we more often than not make sure our music has a steady beat, some kind of logical chord progression and of course, we must end on the tonic. How limiting!

When I dug around into traditional Japanese music, something struck me: “One of the defining characteristics of traditional Japanese music is its sparse rhythm. Regular chords are also absent. It is impossible for a person to beat time to the music. All of the rhythms are ma-based, and silence is an important part of the songs. The focus is on creating music that flows in an attempt to mirror the behavior of nature.” (Reference) First, I am still trying to find out what a “ma based” rhythm is. (If you know PLEASE post below). Second, if you listen to this music, it doesn’t sound chaotic or random. There is beauty and order, yet we don’t really pay a whole lot of attention to it in the Western world.

When I speak to composers, they all stress the importance of generating ideas. They also describe finding inspiration in a variety of places. A composer can find inspiration in the sound of a car horn or crowd noise and use that as the basis for an entire composition. I wonder what Bach and Beethoven would think of that?

Rentaro Taki wrote beautiful music. The funny thing is it sounds like it was based on Western Tonalities and chord structures. I wonder if that had anything to do with its popularity? In any case, it is music that one feels in their soul. As I am planning for the upcoming school year, I am excited to be able to share a new found piece and open up my students to music of other cultures with other ideas.