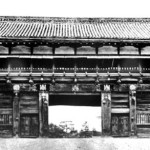 Rentaro Taki’s “Kojo no Tsuki” has an interesting story. It was written as a music lesson for students, but made it all the way to the big stage as both Thelonius Monk and The Scorpions recorded a cover of the song. It was originally an instrumental piece, but Bansu Doï added lyrics later on. No one will ever know for sure the impact lyrics had on its popularity, but regardless, Taki is credited with the well loved composition.

As stated in my article on Taki, this piece of music sounds like it has Western Influences. This is no surprise to me, as it was written during the Meiji period; a time in Japan when they were “determined to close the gap to the Western powers economically and militarily” (Reference). This piece references Western tonalities, but is clearly Japanese ~ a beautiful marriage between the two cultures.

The lyrics cement Japanese patriotism by referencing their history:

“Doï’s lyrics filled with nostalgia and fleeting images. The figurative language is also based on incidents in Japanese history when specific castles were rendered derelict by intense internal wars during the 1860’s. One of these castles was the Aoba Castle in Sendai. In particular, Doï was inspired by a poem by Yaeko Yamamoto, a female fighter, rifle markswoman, and gunnery instructor. Her poem was scratched with an arrow on the wall of a castle about to fall during a siege. The references to encampments, swords, and the desolate castle in Doï’s lyrics are distinctly at odds with the cherry blossoms, and the once splendid castle. The lyrics subtly balance the violence of war, the pleasure of eating under cherry blossoms, and fond memories, each of which is exposed under the cold light of the moon. Did Taki the musician intend the beautiful melody to have such lyrics? The composer and the lyricist seem to have met only once so as Fats Waller sang, “One never knows, does one?” (Reference)

I love that in a time where women were not necessarily celebrated, this popular piece is based on a poem written by a woman….and a “female fighter” at that!! I was unable to find the exact date of when the lyrics were written and added, but she lived from 1871 – 1952. There was a lot going on for women at that time, but nothing elevated them to equal the status of men. (Reference)

This piece is beautiful and soulful. It is no wonder that it was remade. It will be fun to highlight in the classroom when talking about songs and variations. Monk and The Scorpions took this piece and made it their own. This is one of the most important parts of education….teaching children to make what they learn their own. As usual, music acts as the perfect medium to drive home this point!