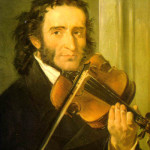 As a violinist, Niccolò Paganini is, of course, someone I am in awe of! His compositions are extremely difficult to say the least, yet beautiful and exciting! David Garret, a violinist out of Germany, played him in a movie called “The Devil’s Violinist”. It is cheesy, but the violin playing is amazing! I have become obsessed with Caprice No. 24 as a result! You can check this movie out on Netflix, but I would fast forward to the violin playing…the story line is one I couldn’t even stay interested in… and I will watch almost anything!

In celebration of Paganini’s birthday on the 27th, here are some fun facts for you to share with your students…..