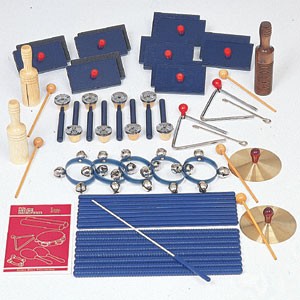 As promised, here are a few more ideas to engage your students with our “Queen, Queen Caroline” story! Today, after we whispered our names during the “fishy song”, we dug a little deeper and analyzed the 4 voices a bit. Which one was loud, and which one was soft? Which one made our voice go higher and lower? Which one do we use every day? They had a great time with this!
* I then brought out 4 different types of instruments: glockenspiels, triangles, rhythm sticks and cymbals. We named them and spoke about how to make sound from each. Do we shake it? Blow into it? Etc. We spoke about how loud/ soft the sound was that it made and finally linked it to the 4 voices we have been discussing. Which instrument sounds like singing? Both the Kinders and the 1st Grade called out the glock. What instrument matches a shouting voice? The Kinders called out the cymbals, but the 1st Grade decided on the rhythm sticks. This was fine until they said that they wanted the triangle for talking voice and we were left with the cymbals for a whispering voice. The problem soon became evident, so we switched the last two. Kinders decided on the triangles for whispering and the rhythm sticks for our talking voice.
After dividing the group into 4, I assigned each group one of the instruments and had them echo back to me each line of the poem. It went well! My hope was to tell the story again, but this time have them play the poem instead of having them say, sing, whisper or speak it. I guess it will have to wait until next time!!
* Have kids play the poem on their instruments at the same time. Use this as the head and then give each group a turn to improvise for a count of 8. This is a great time to use the TALA concept that I spoke about in my eBook! Let me know if you need a copy!
* Figure out the rhythm of the poem in Note Knacks!
* Divide class into 2. Have one half play the whole chant and have the other half create an ostinato with Note Knacks. Play it through several times and then switch!
* Someday I would like the kids to perform this story on stage with costumes and a set! We would make it our own by adding in the elements written above!
If you have some ideas on how you would extend this story, please let us know in the comments below!!