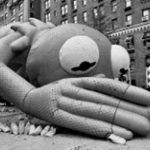 The Macy’s parade interactive website offers a variety of facts and photos from its long history, but I pulled out those that I thought were musical noteworthy! (Some are direct quotes, while others are a summary) Here they are: