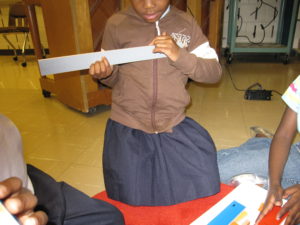 As my kinders were working on their song for the holiday program, I noticed that they were having a hard time holding certain notes long enough. Since we have been working on starting, sustaining and stopping together (read lesson HERE), I thought this would be the perfect opportunity to put it into action!
At first, I moved my arm in an arc from one side to the other ~ the idea being that kids would sing the note until my hand reached the other side….yeah, not so much. Despite my reminding them to hold the note, many would cut out early ….and it wasn’t precise. SOOOO, I decided to turn to my handy dandy Note Knacks!
I reminded them that they KNEW HOW to start, sustain and end a sound together. Didn’t we just do this with our Silly Sound compositions? They were great at performing those, even as a group! I told them that we were about to do the same thing, but instead of making a silly sound, we were going to sing our note.
I pulled out a whole note and every time there was a long note, I dragged my finger across and when the note ended, my finger reached the end of the Note Knack. THIS WORKED!!! Wahoo!!
I know the techniques in Phase 1 are unconventional, but it is times like these that you can actually see the results! It makes a length concrete to little ones, as they are not counting beats. After our Thanksgiving break, I will let a few of the kids grad their finger across and see what happens!!