Last week we explored length of sound in Pre-K! I just got a new set of NK magnets (I was still using my prototype set from way back when) and wanted to take these out for a spin! So I put one of each of the sound side and asked the kids what they noticed. 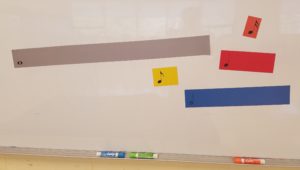 Kids noticed different colors and sizes ~ perfect! I first asked which was the longest one. “GRAY”, they all shouted! …and which is the shortest? “Orange!”. Yes! …but I did mention that it is actually a funky kind of orange called “terra cotta”. They said it, but forgot almost immediately. Oh well….that’ll come 🙂

I knew asking them to put them in order from shortest to longest was a bit to ask, so I placed them out of order and asked if they looked like stairs in their house? (The step xylophone helped!) 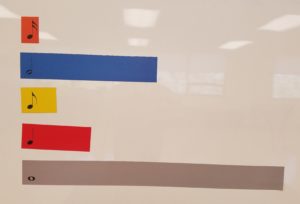 “Nooooo”. OK, so what if I change them around a bit? I switched them a couple of time until they looked like this: 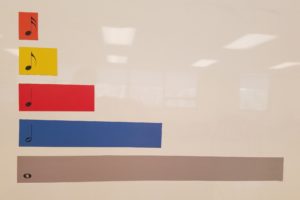 OK! So now we went right into the first phase of the Note Knacks lesson plans and sang while we I dragged my finger across. The goal was to have kids start together, continue together and stop at the end together. They did a great job! (I also made the stopping point VERY obvious with a large arm wave gesture!!) We made all kinds of sounds! One kid made a car sound so the next time we did it, I “drove” the car across on the board. They thought that was hilarious!! (I should mention that I had the cars ready to go. I knew that if we talked about different sounds, someone would certainly come up with a car sound)

To take it to the next level, I placed the magnets on the floor and made a “roadway”… 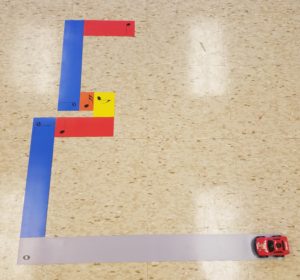 …and then another one…. 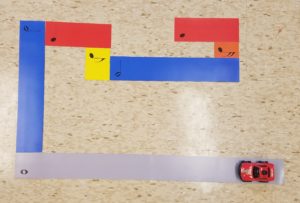 One of the kids said that the car looked like a race car. “Do race cars go fast or slow?” “FAST!” SO we said our car sound very fast as I drove the car across the gray very fast. We did that a few times, as they loved it!! Then we took the large truck and because it would drive slower, I drove it across slowly and we said our sound slowly.

I hadn’t even thought about bringing up tempo until a student mentioned it. This is what I LOVE about teaching. You never know what they are going to come up with and how they will help teach themselves!!

Let us know your brilliant children stories in the comments below!!!!