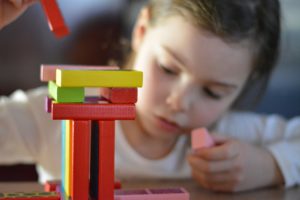 Yesterday I was at a playground in an open mall here in GA with my daughter. She saw a wall activity where kids can flip a series of large tiles. Although another child was playing, she thought she would join in. He got angry at the intrusion and pushed her away. His mom immediately jumped in and told him to not do that and to share. She also told me that it was so hard for kids to get this concept at this age. My daughter is almost 3 and her son is about 2. I saw a teachable moment ~ a bit audacious of me, I know, but it was a perfect opportunity ~ especially because I could see that the mom felt badly about it.

I first said to Pea (that is my nickname for her 😊), (she didn’t cry, but was taken back some), “You’re ok. When he is finished, you can have a turn.” I then turned to the child and said something along the lines of when you are finished, she can have a turn, but please don’t push her. I can’t remember exactly what I said, but that was the gist of it. The mom continued to feel badly, but I assured her that it was fine. I told her that he may be figuring something out and Pea disrupted his thought process… or he just needed some alone time. Either way, he deserves a chance to play with it for a time ~ and then Pea can have her turn with the same parameters.

My mother, an amazing teacher in her own right, would always talk about this when she was in the classroom. It is presumptuous of us to know what is going through a child’s mind at any given moment, especially at this age when “using your words” to express a thought is still developing. Each child has a right to tinker and play with materials in their own way until they are finished, or their turn is up due to time constraints or limited resources.

Why can’t we give them the time they ask for? After all, aren’t we, as adults, allowed to tinker with something before we give others a chance? Example, if you are working on your computer and your significant other needs to use it for whatever reason, you finish what you are working on and then let him/ her use it…. You are not required to drop what you are doing immediately and give it to him/ her or let him/ her use it at the same time…. it is no big deal! …yet, we ask kids to stop what they are doing and accommodate another child all of the time! We somehow think this is the way to be a good friend.

Of course, this isn’t to say that children should be allowed to claim a whole play area for themselves or allowed to use a material for hours on end. Parameters do need to be set, but with each child’s interests in mind.

In the end, it is about respecting children’s rights and giving he/ she the time needed to explore. When finished, the next child will have a turn….and as 2 added bonuses, you will avoid an outburst of anger AND more than likely that child will invite the other to play along or will be finished with the material soon. When given the same freedoms that we enjoy as adults, children will surprise us with just how amazing they are!