I was thinking about activities to do with my older kids, as the concert is over and we still have 2 more classes. I thought about doing the standard sing-a-longs or an in-depth look at The Nutcracker, which are both fun and offer great opportunities for learning, but I wanted to do more composing ~ of course!! This is also a lesson I will be able to build on throughout the year!

Kids love to work with their names, as each one is unique to that child. So I began there. Kids reviewed their names and figured out what letters were part of the musical alphabet and we took it from there….. 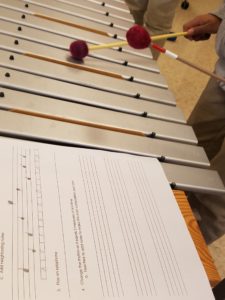 The cool thing was at the end of the class when I asked kids their thoughts, a few had some great ideas on what they could do with it. One student showed us how he took his “4 note pattern” as he called it, and played it in a variety of different ways. I LOVE when the kids get into the lesson!!