The first graders have been working on long and short, so this week I wanted to offer an activity that they could not only have some fun with, but could also apply what we have been talking about. The 2 goals I had in mind were to first, identify the long sounds in the song and second, change where those long sounds occurred. As is typical, the long sounds were at the end of a each phrase, so I thought it would be fun to see what it would sound like if we put a long sound somewhere else. The kids and I experimented with a long sound under almost every syllable! We had a blast! …and a lovely side effect was that it offered an opportunity to discuss the “one note per syllable” concept!

* Choose a song they know well and sing as is ~ I chose Shoo Fly because it is well known and it offers a variety in note lengths. I can see using this song for lessons to come!!
* Separate lyrics by syllables ~ (4/4 is easier). (this is also a lesson on syllables… your welcome regular ed teachers! 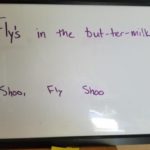 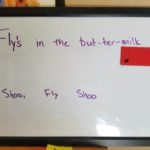 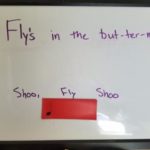 * Place the long rectangle under that syllable you want to change. As you can see, first we sung it under “milk” then we put it under “fly

* Again, drag your finger across as you sing the note. Sound sustains for as long as you are dragging your finger.

* Try it with another syllable (This is where kids might try to put it under “butter”. I asked my student today if she could tell me how many claps in the word “butter”. She said 2, so how many sounds does it get? 2… and we went from there!!

* Send kids off into small groups or use as center activity with the all of the lyrics on a page. 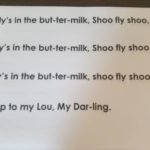 * The directions were for each kid to put a blue line under the syllable they wanted to be long. Here are some examples! 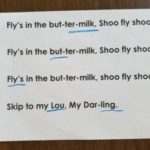 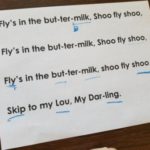 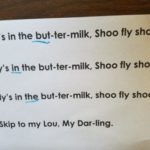