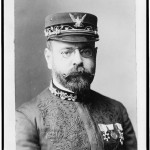 I remember as a young violinist in my youth orchestra listening to Sousa’s Stars and Stripes Forever and thinking how cool it would be to play the piccolo! I always get so jealous when he or she stands up at that precise moment and plays such a fun melody!

So in celebration of Sousa’s birthday on the 10th, here are some fun facts for you to share with your students:

Sousa said it best: “Jazz will endure just as long people hear it through their feet instead of their brains.” (This makes me smile!)